Can installing rooftop solar panels get your home insurance canceled? 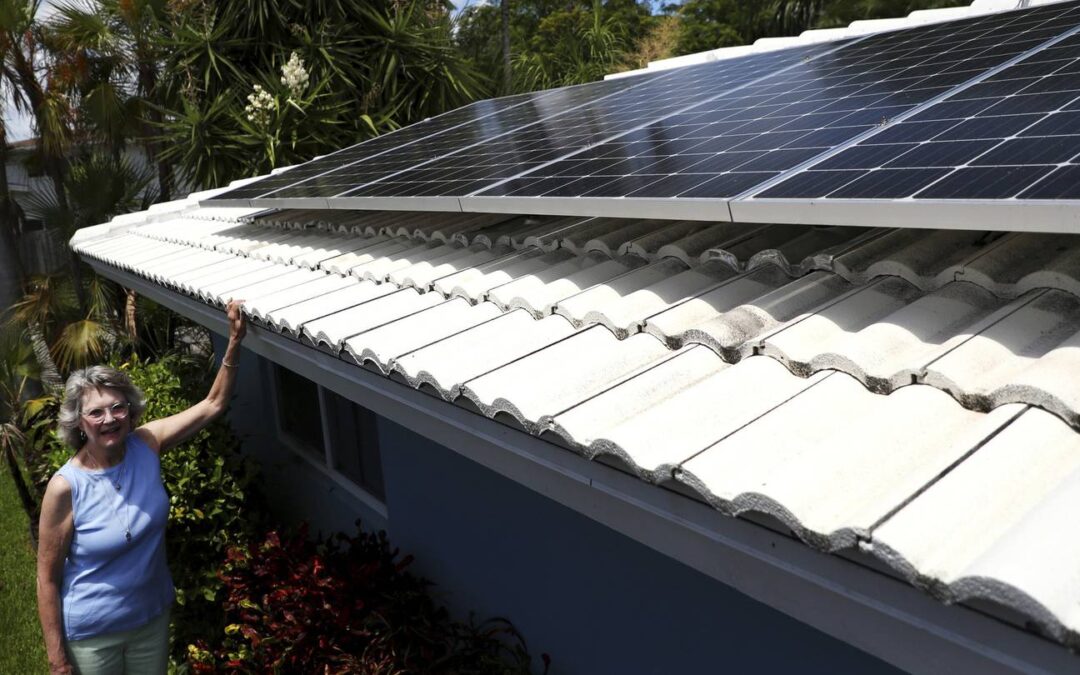 Ron Hurtibise reports in the South Florida Sun Sentinel that many rooftop solar owners may be surprised to learn that their new solar systems may affect their home insurance bill — and not in a good way.

But in calculating system costs vs. electric bill savings, many would-be solar owners are neglecting to consider how a solar system will affect their home insurance bill — or how difficult it might be to find a company that will insure them at all.

And with insurance premiums skyrocketing for all Florida homeowners, solar customers who can obtain coverage might also find that the price increase will wipe out any energy-cost savings they expected from going solar.

Oakland Park homeowner Holly Strawbridge learned this the hard way. She installed a modest 8,000 kilowatt system atop her home about two years ago and recently signed up for coverage with Edison Insurance Company. After the insurer sent an inspector to her home, she received a letter canceling her entire policy.

“I was shocked,” Strawbridge said. “I’ve never filed an insurance claim and I’ve lived in this house since 2001.”

The reasons cited in the cancellation letter sent by Edison: Her solar panels are ineligible for coverage due to the age of her roof (11 years) and because she has a tile roof.

Those aren’t the only reasons insurers won’t cover rooftop solar systems, according to interviews with solar installers, solar energy advocates, and insurance agents. Insurers who do business in Florida offer a wide variety of reasons for refusing to insure homes with them.

Increasingly, insurers are claiming that solar systems with net metering connections to utilities — which is virtually all of them in Florida — pose a unique risk of injury to line workers and damage to the utility grid.

Florida Power & Light’s net metering contract requires homeowners to take responsibility for all potential damages, says Ryan Papy, president of Palmetto Bay-based Keyes Insurance. “So if there’s a surge running through your panels that causes damage to the grid or other homes, the client is responsible.”

Solar installers and advocates call that justification unfounded. They say all equipment used to connect rooftop solar systems to the grid comply with state building and electrical codes and are inspected by utilities before new systems are activated. Utilities also have authority to come onto solar owners’ properties and disconnect them if they suspect any safety issues, they say.

Many insurers who operate in Florida, faced with mounting losses, have been dropping or nonrenewing policies to reduce the amount of overall risk they carry on their books of business. In some cases, state insurance regulators have ordered insurers to shed policies so they can afford to purchase reinsurance — insurance that insurers must carry to be able to pay all claims after a catastrophe.

Justin Hoysradt, president of Vinyasun, a solar installation company based in West Palm Beach, says the potential dangers of backfeeding are exaggerated.

Since 2006, all power-producing inverters have complied with an electrical standard called U.L. 1741, Hoysradt said. This standard requires solar system inverters to be able to detect utility outages or any odd voltage disruption and automatically disconnect the solar systems from the grid.

Hoysradt says he is unaware of any documented instance of injury or damage from a properly installed UL 1741-certified inverter.

The cut-off technology is so dependable that utilities recently removed a requirement that solar systems be equipped with separate redundant remote power-off switches, he said.

Until about a year ago, Hoysradt rarely heard customers complain that they couldn’t find or keep insurance because of their solar systems. Now, at least one potential customer a day says their insurer could not guarantee they wouldn’t be dropped if they install solar, he said.

Campbell says her organization has documented about 60 homeowner complaints over the past year. They either say they’ve been cancelled after installing solar panels or told they would no longer be eligible for coverage if they install panels, she said.

Olympus Insurance laid out an extensive list of concerns about property and liability exposures in a 2020 filing with the Office of Insurance Regulation, while seeking approval to exclude solar systems from the risks it must cover.

They included increase exposure for damage due to wind uplift when solar panels are attached to a roof, increased exposure for wind or hail damage to the solar system itself, fire hazards from loose or poorly connected parts or wires, increased risk or electrocution, presence of toxic materials and byproducts of the panels themselves, and potential liability associated with backfeeding to the grid.

Without commenting on the validity of the concerns, the Office of Insurance Regulation told Olympus it could not allow a broad mandatory exclusion for coverage of solar unless the company provided an option for solar owners to “buy back” the coverage at an increased price. Olympus withdrew the filing. It could not be immediately determined from the office’s filing database whether the company resubmitted it with the buy-back option.

Campbell disputes claims that rooftop solar systems make roofs more susceptible to wind uplift during hurricanes. She said after Hurricane Michael struck the Panhandle in October 2018, many roofs with solar panels remained intact amid roofs without solar panels that were destroyed.

Paul Handerhan, president of the consumer focused Federal Association for Insurance Reform, said concerns about wind uplift stem from the potential for increased damage if solar panels and roofs are torn from homes together.

Suarez-Resnick concurs: “With stronger winds like a Category 3 hurricane, you might have much more damage if panels go flying and land on your neighbor’s roof or car.”

Companies that do insure rooftop solar systems are allowed to set strict conditions for that coverage, filings show.

Edison, the company that cancelled Strawbridge’s policy, will only cover homes with solar systems that were installed after 2016, on shingle or metal roofs no older than 10 years, on flat roofs no older than five years, and produce no more 10 kilowatts of electricity, which is more or less the typical rooftop system capacity.

As Strawbridge found out, Edison will not insure solar systems mounted on clay or tile roofs. Stacey Giulianti, chief legal officer at Florida Peninsula Insurance Company, parent company of Edison, said, “We chose not to insure solar panels on tile roof homes due to the challenges presented by the attachment of the panels to the roofs. Most tile roof installations require attachment brackets which must pierce the tile roofs.”

Read the rest of the article here.