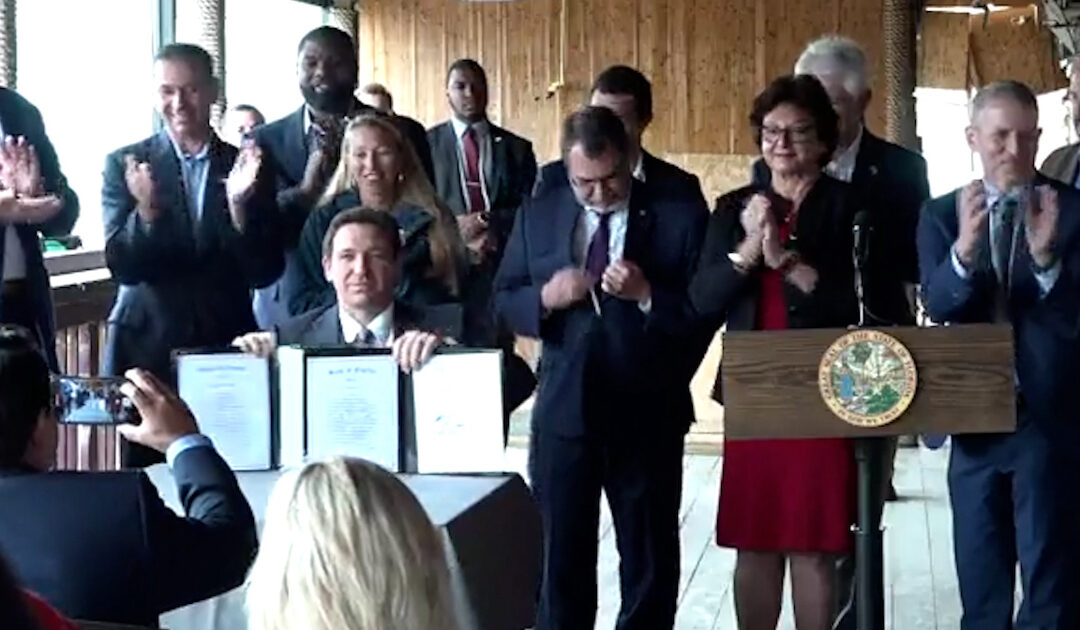 “This bill reins in the incentive to litigate,” DeSantis said before signing the bill in Fort Myers, an area devastated by Hurricane Ian in September. “This is going to make a huge, huge difference.”

What does the property insurance bill do?

At 105 pages, this legislation is a big escalation in how Florida’s government is intervening in the property insurance marketplace. There are three main components to the legislation:

The bill stops so-called “one-way attorney fees” which require companies to pay lawyer fees and costs when they lose in court.

“We have to stop frivolous litigation,” said Rep. Tom Leek, an Ormond Beach Republican who sponsored the bill. “In 2019 Florida insurance companies spent $3 billion defending lawsuits, and every dollar spent on litigation is a dollar that doesn’t go to the consumer.”

Democrats, though, slammed the bill for limiting homeowners’ ability to sue their insurance companies. “This legislation puts homeowners on the hook for everything,” said Rep. Yvonne Hinson, a Gainesville Democrat. “They will make hiring an attorney so cumbersome and costly that most homeowners will not be able to afford it.”

The bill also ends assignment of benefits for property insurance claims: this is where a homeowner can assign a third party (such as a roof repair company) as their beneficiary for property insurance benefits, allowing that company to pursue the claims on their behalf. Supporters of this reform claim this incentivizes excessive lawsuits.

“This is a pro-consumer bill that should drive down litigation abuse and put the property insurance market on a path to stability,” said Personal Insurance Federation of Florida (PIFF) President and CEO Michael Carlson.

“The Legislature is right to focus on lawsuits, and Senate Bill 2A includes bold provisions, including the prohibition of the one-way attorney fee, to fully address the property insurance litigation environment in Florida. We are hopeful this outcome will stop Florida from having to play whack-a-mole with new insurance schemes, and we are grateful for its swift passage as it heads to Governor DeSantis.”

Depopulating Citizens: As private insurers have dropped policies and raised rates, the number of Floridians flocking to Citizens Property Insurance has skyrocketed. The law tries to “depopulate” Citizens, by preventing Citizens policyholders from being able to renew coverage if they receive policy offers from private insurers that are within 20% of the cost of the Citizens premiums. The change could lead to higher rates for homeowners shifted to private companies.

One of the most contentious provisions in the bill is a requirement that many Citizens Property Insurance policy holders obtain flood insurance. The changes could affect roughly a million homeowners across the state.

Some policyholders with Citizens would be required to get flood insurance immediately, while others would have until the year 2027 to insure their homes from damage from rising floodwaters or torrential rains.

The Florida market has been hammered by higher costs and lack of availability of reinsurance, which is vital backup coverage for insurers. The bill creates a program, the Florida Optional Reinsurance Assistance Program, or “FORA,” that seeks to temporarily help insurers obtain adequate reinsurance. It would effectively offer additional levels, known as “layers,” of reinsurance funded through $1 billion in state tax dollars and premiums paid by insurers.

Criticism of the “bailout”: Democrats argue that the legislation is in effect a ‘bailout’ for a failed market and does not hold to account those in the market and in local government who allowed the crisis to unfold, including Florida Insurance Commission David Altmaier.

“Florida House Republicans and senators just passed a bill that provides a $1 billion bailout to insurance companies and no real rate relief to Florida homeowners,” Democratic caucus chair Fentrice Driskell said. “We’re at a time when Florida has its largest budget surplus in history and rather directly help homeowners we provided a bailout to the industry,” she said.

Defense of “expanded capacity” in the market: Representative Tom Leek also commented: “The carefully considered provisions in this legislation will expand capacity in the property insurance market, increase accessibility for consumers, and hold insurers accountable.”

“In terms of immediate, you will see more people be willing to write policies in Florida because of what we did,” Gov. DeSantis said.